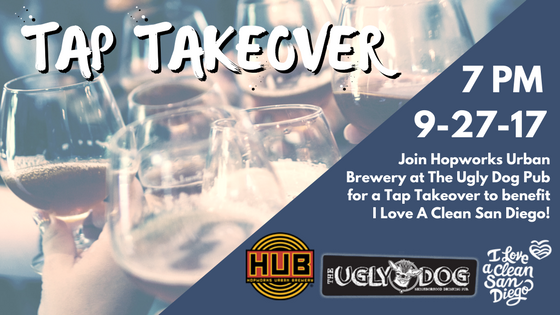 The Ugly Dog is teaming up with Hopworks Urban Brewery to bring you an exquisite Tap Takeover to benefit I Love a Clean San Diego. On Wednesday, September 27, 2017 starting at 7:00 PM, Hopworks Urban Brewery will takeover the taps with a number of beers featuring a special release, Total Blackout, an Imperial Cascadian Dark Ale made with hops picked during the 2017 Solar Eclipse at Goschie Farms in the Willamette Valley; additionally, Ferocious IPA, Gear Up IPA, Wave Train Organic Amber, Organic HUB Pilsner, and Long Root Ale.

A portion of all proceeds raised that night will be donated to I Love A Clean San Diego! So head over to The Ugly Dog on September 27th and grab a beer to help support us reach a litter-free, zero waste, environmentally engaged San Diego region!